This weekend I attended two PPTQs, in two different cities, and managed to get crushed by two completely different decks that had one thing in common: Mesmeric Orb. 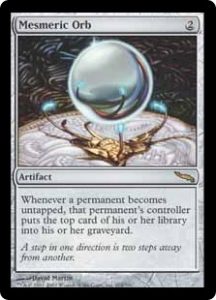 I’d like to start off with Sunday first, where 64 players gathered in Camrose for the Anime Hypercubed PPTQ. Before I dive into the event, I would like to extend a huge thank you to the ladies at Anime Hypercubed who put on these PPTQs every quarter, as they are largely regarded as the best qualifiers in the province. People from all over Alberta (and even a few travellers from Saskatchewan) gathered with a variety of lists to attempt to hedge out the competition, but there was one list in particular that stood out to me, and it’s not something I ever expected to face.

Edmonton level 2 judge, shop-owner, mtgedmonton.ca founder, and all-around pillar of the local Magic community Brendan Capel managed to pull off a 14th place finish with this monstrosity of a deck, being defeated in the final round to knock him out of top eight contention. With cards like Archive Trap, Glimpse the Unthinkable, and newcomer Manic Scribe, as well as haymakers like Crypt Incursion and Ensnaring Bridge, this deck attacked from such a unique angle that I’m not sure if any deck was truly prepared for it. While the deck does seem weak to aggressive strategies (I believe Brendan lost to Naya Burn and Temur Delver), it is something I’d love to try sleeving up in the near future.

Now to jump back to Saturday’s event, where I ran into a very different side of Mesmeric orb. For those not familiar, Four Horseman is a legacy deck that uses a combination of cards to mill itself an arbitrarily large number of times until you assemble the correct cards in your graveyard to bring permanents back to the board and eventually… sometime in the distant future, kill your opponent. It is not legal in any judged event because you can’t give an exact number of repetitions of your loop until you have the correct setup, and as soon as you don’t hit Emrakul, the Aeons Torn before anything else your opponent will call a judge and you will receive a slow play warning.

Well, one intrepid magic player decided that he would find a way to negate any such slow play warnings, and all it took was the addition of Forbidden Orchard. Now, I can’t speak to whether there are any other ways that my opponent could use to circumvent this, as I was only witness to one (never-ending) game, but the combo I saw went something like:

Fatestitcher lets you untap Forbidden Orchard, which lets you mill a card. Tapping Forbidden Orchard puts a spirit into play under your opponents control, which untags Fatesticher, and so the cycle continues. This lets you generate infinite mana while cycling through your library, and the spirits being put into play constitute advancing the board state so you don’t get slow play warnings. The judges are helpless against you. Eventually you get Blasting Station back from your graveyard, and begin returning Narcomoebas and pinging them at your opponent.

Now, I’m not suggesting you play this deck, unless you would like to be the most hated person at any event, but the deck’s controller did it to highlight one thing: that the current rules put in place are inefficient, and need to be updated. For instance, this deck is not something that would exist in Magic Online, because your clock would always be the one to time out. And I’m not sure what a solution would look like, but I have faith that those much more familiar with the intricacies of Magic rules and regulations would be be able to find one.

Have you had any experiences with or against Mesmeric Orb in Modern? Good or Bad? Let me know!